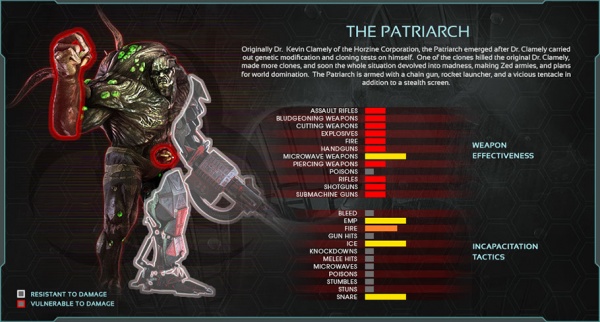 The Patriarch is one of the five bosses faced at the end of a standard Killing Floor 2 survival game. Compared to his appearance in the first game, he is heavily mutated, having gained a lot more muscle mass as well as having more cybernetic enhancements. He retains many of his iconic attacks, quotes and AI, and as well as some new tricks. He has a massive weapons platform in place of his left arm, which holds a powerful Minigun and Missile Launcher, as well as healing syringes strapped to his leg which he uses to heal himself when retreating. 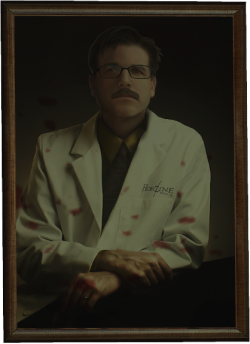 The Patriarch bears an impressive amount of resistances, being resistant to every form of damage in the game any only being weak to electrical attacks of Survivalist's HRG Arc Generator. He is neutral to freezing damage of the Survivalist's Freezethrower, ballistic impact of the Demolitionist's explosive projectiles, DOT of the Hemogoblin and to EMP damage emmited by such damage sources as map traps, E.D.A.R explosion or Berserker's grenade. He is also nearly immune to toxic damage types with the exception to Field Medic's HRG Healthrower.

Patriarch's special zone is a chest tentacle (only exposed during the grab).