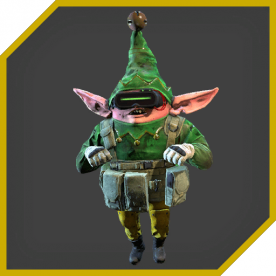 Players begin their journey in the Central arena containing the only available Trader Pod on this map. For every even wave (and exluding every next wave after the Boss wave in Endless) players getting teleported to the one of the randomly chosen arenas including Desert, Fallout, Forest, Old Town, Void Zone, Glitch as well as to two secret arenas available after completion of certain tasks. After fighting their way through the wave of ZEDs players will be teleported back to the Central arena to replenish the ammo. In this Central arena they would have to stay for another wave just to get them randomly teleported again.

To unlock secret arenas players would have to find 3 roses in the Forest arena and place them in vases in the Central arena (that would give them access to Botanica level) and to find 4 tomes and place them on pedestals next to the one of Central arena's walls (to unlock Lore Master Sanctum). However players would still have to test their luck as these new secret arenas will still only be picked randomly.

As players visit new places and travel back, the Central arena changes its shape growing more and more details from the dimensions players visit. Such as after visiting the Fallout arena that is filled with toxic waste the Central arena will get decorated with few giant vertical pipes pulverizing green liquid that would hurt both players and ZEDs. These new decorations add complexity to the Central arena making navigation there both hard (during normal waves) and easier (during Boss waves) granted that it provides more and more cover as well as new environmental hazards.