The Carillon Hamlet is a community-made official Killing Floor 2 map. Is was added in the game as a part of Chop 'Til You Drop update. It is a standard-issue survival map compatible with Survival, Endless and Weekly game modes.

Hello mercs, Where will you go this winter, armed with your new toys? Carillon Hamlet, a small industrial village that was preparing for holidays has gone silent. We have heard rumors of vicious elves taking control of the area. The hotel and other businesses seem abandoned.

The town's old train has come to a stop. The Horzine Rail station is still and empty. At this time it’s unknown what exactly was being transported.

Investigate the dark winding underground tunnels. Scans have revealed some unusual activity. We’ll need some brave mercs to venture there.

The village is full of scenic views that would normally charm even the most bah-hum-bugs of Scrooges. Void of the normal seasons cheer, the streets are now home to the twisted holiday creatures. Clear out the area and paint the town in the usual seasonal red.

Upon completion of series of objectives on Carillon Hamlet during the Chop Til' You Drop event players were rewarded with the "Holiday Shopping | Companion | Precious" cosmetic accessory. 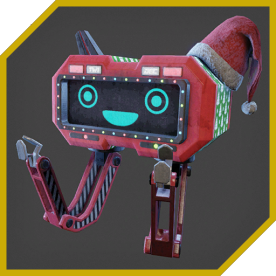