Formerly known as Rachel Clamely, a Patriarch's daughter, the Matriarch is one of the five bosses faced at the end of a standard Killing Floor 2 survival game. Completely legless, oversized and heavily mutated she is embedded into a mech powersuit bearing wide variety of weapons for her disposal on a board. 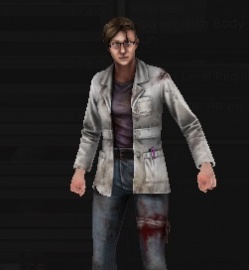 Her armored zones do not have specific damage multipliers, they do in fact share the same hit boxes as the body parts they cover. For details on calculation of damage to ZED's armor refer to step 7 of "ZEDs - Damage to take" mechanic.

Matriarch not only has extremely resistant body parts, but also resists most common forms of the damage. She is most vulnerable to Survivalist's HRG Arc Generator and melee attacks.

Matriarch's special zone is a small moving sonar-like device ("box") over her head that she uses for Lightning Storm and Warning Siren attacks.

In multiplayer (when there is more than 1 player at server) The Matriarch will gain 20% bonus movement speed every minute if only one player is left alive, up to a cap of 30%. She will also gain the ability to break down unwelded doors by running into them.