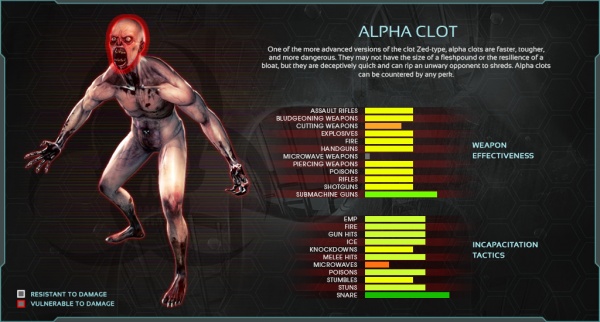 The Alpha Clot is a common specimen in Killing Floor 2. They appear as hairless, fairly athletic males, looking the most "normal" compared to the rest of the specimen horde. They walk in large groups alongside their brethren, the Cyst and the Slasher.

It is classified as a lesser enemy, their main purpose being to populate waves with dozens of them supporting the other ZEDs. Though each Alpha Clot is fairly weak individually, their true strength comes from the sheer numbers of how many there are.

Alpha Clots move slowly when docile, and will sprint when enraged.
On higher difficulties, Clots have a chance to enrage upon seeing the players, and have a chance to enrage when shot.
Once enraged, Clots will never stop sprinting until they are killed.
Movement speed is randomized within ± 10% range and further modified by a multiplier based on difficulty.

Clots have little to no resistances to most forms of damage, except for Microwave, which they resist.

Clots have no resistances to ballistic weaponry and are extremely vulnerable to SMGs.

Clots only have one weak spot, which is their head.

The Alpha Clot is a predictable, melee-only ZED.

Upon spawning, it will walk or sprint towards the nearest player and attempt to scratch them, or grab and bite them, immobilizing their target.

On Suicidal and Hell On Earth, Alpha Clots gain additional attacks that they will use when they are enraged, such as leaping or slamming into players. Other than that, their behavior does not change drastically between difficulties. 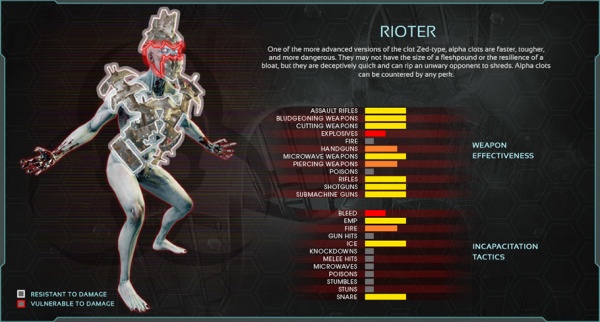 Rioters, also known as Elite Clots, Albino Clots, or King Clots, have a chance to spawn on Suicidal or Hell on Earth. They can easily be identified by their metallic armor on their chest and head, and their pale white skin color, along with the blue, glowing veins all over them.

Rioters boast higher health and damage compared to normal Alpha Clots, and they have the ability to Rally nearby ZEDs, increasing their damage and forcing certain ones, mostly lesser ZEDs, to sprint. They should be considered a priority target as they can, if left unchecked, rally a substantial amount of other ZEDs, drastically increasing potential damage done to players. They usually weave in and out among the ZED hordes before Rallying.

In order to activate their Rally, there has to be at least 3 other ZEDs within a 10m radius. The evaluation of the Rally possibility happens within 0.5 second intervals.

Rioters wear 2 pieces of armor - one on its head and one on its chest. Each armor piece has its own health that will absorb ALL the damage dealt to the respective body part. AoE attacks (e.g. fire, explosives) will have their damage split across all existing armor pieces in equal parts. The Rioter's back, arms, and legs remain exposed, dealing full damage to the body without affecting the armor.

Rioters are notably vulnerable to fire and EMP effects of Survivalist's HRG Arc Generator, unlike normal Alpha Clots, which are neutral to them.

While the Rioter shares almost the same resistances and vulnerabilities as a regular Alpha Clot, its armor actually has different multipliers from it. The armor is notably vulnerable to Hemogoblin's DOT (but not to the initial impact which Rioter is neutral to) and fire.

As they are lesser ZEDs, they are equivalent to cannon fodder, made to waste time and bullets that should be directed towards more dangerous specimens.

In early waves, ammunition can be saved by switching to the Knife and aiming for their head; a good strike will usually decapitate them. Try to take them out quickly or put some distance between you and them, so you can focus on the real threats sooner.

Any Perk can handily deal with Alpha Clots, but they are particularly weak to SMGs, making SWATs the best perk to deal with them, especially given their higher magazine capacity.

Beware of their grabs, as Alpha Clots can be responsible for killing off solo or unaware players by immobilizing them, giving more dangerous enemies time to catch up and kill them. Unlike Cysts, their attacks aren't slow and they can easily wear down armor and health when grabbed.