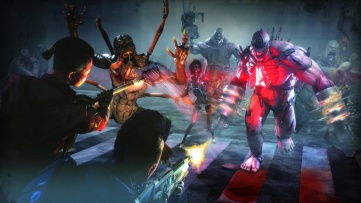 Survival is a Killing Floor 2's signature gamemode. In this mode players equiped with various perks and weapons withstand the armies of AI-controlled enemies throughout the set of waves and face off one of the five1 bosses and the last wave as an ultimate challenge.

Maximum amount of ZEDs that can exist on the map at the same time depends on the game difficulty and how many players are currently alive.

Maximum amount of the ZEDs to spawn at the same time during the boss wave calculated as:

Minions At Time = Base Amount x Per Player Scale

1 The method of boss predetermining is yet unknown: prior to randomly picking one of the 5 bosses to fight, game firstly check if it has to force a specific boss depending on a currently active event or a specific map (such as Krampus being a guaranteed boss on the Krampus Lair map). This first part is done natively and there is no way to certainly tell what are the actual probabilities of bosses to appear. However, neither it is known if the responsible function (type, name and return type would be bool UseSpecificBossIndex(out int ForcedIndex)) for the lack of known arguments used by it, is actually capable of modifying boss spawn probabilities rather than setting a specific boss index. Developer commentary for this function - "Event or maps-specific override functionality" - is likely implies that if specific boss to be ever forced then it would be during a specific map or an event so it is safe to assume that under normal conditions boss spawn probability is completely random.