Difference between revisions of "Monster Ball"

The Monster Ball is a Killing Floor 2 map. Is was added in the game as a part of Monster Masquerade update. This halloween themed map that takes place in an old castle decorated and modernised to host a rave party, a lot of graffiti and modern art elements can be seen outside the main structure. On the balcony of left side of the map there is floating platform where Hans himself resides as a DJ. The right side of the map is a castle's indoors which is rather narrow area with a lot of corridors and obstacles scattered around them. Map is fully compatible with Survival, Versus and Endless gamemodes.

There is a locked door at the left to the main courtyard, right next to the fire trap under the bridge. Players may unlock it by approaching it and pressing USE button. In exchange for 1250 Dosh (in Survival Mode) the new area of the map will be unlocked.

Upon completing a series of objectives on Monster Ball during the Halloween Event players will be rewarded with early access to Commando's Mkb.42(H) Carbine Rifle as well as to unique weapon skin for it. 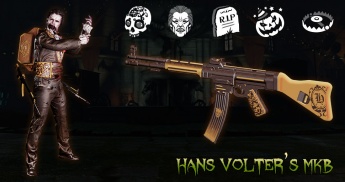 In the room behind locked door there are two boxes sitting on the table, one of them is initially locked. It contains a "thing" which may be revealed by pressing 3 hidden levers on the map. Levers have to be pressed in a specific order: