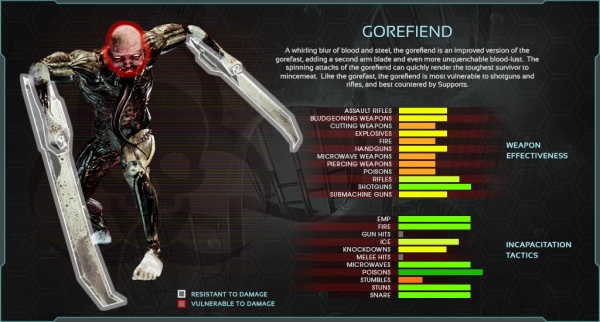 Gorefiends appear as the same as Gorefasts but dark skinned and has a long tongue, wielding 2 large swords wedged in both arms. They are quite durable and fast, while also possessing the ability to spin at a fast rate damaging their fore. They fulfil the role of the damage dealers and for a small line of defence in the specimen line-up. Gorefiends utilize same AI settings as normal Gorefasts and has difficulty-specific odds to spawn instead of their single bladed counterparts.

Chance to spawn, instead of Gorefast:

Gorefiends move slowly when docile, and sprint when enraged.
Gorefiends will only begin sprinting upon getting close (8m) to players. They do not sprint on sight despite having 100% sprint chance.
Gorefiends will sprint once they are shot.
Once enraged, Gorefiends will never stop sprinting until they are killed.
Movement speed is randomized within ± 10% range and further modified by a multiplier based on difficulty.

Gorefiends have a large range of resistances to non-ballistic weaponry.

Gorefiends only have one weak spot, which is the head. Their bladed arm deflects attacks.